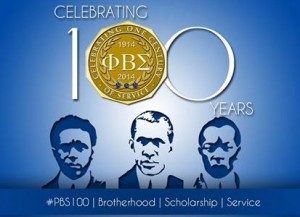 The ribbon cutting ceremony was one of several events planned for members and their guests to take part in during the 2014 Centennial Celebration. Members of  sister sorority, Zeta Phi Beta, also attended the ribbon cutting.

“I traveled all the way from Detroit to be here just to see this museum,” Ben Hilton, a Sigma member told the AFRO.  “A lot of my brothers may have forgotten the history and origins behind the Sigma name, but this museum is here to help refresh their minds.”

International President Jonathan A. Mason thanked his fellow brothers, during the ceremony and emphasized the museum, in the Kennedy Street corridor, was built for them.

When the ribbon was cut, hundreds of people flooded into the new space in awe.

“This is a moment in history that I will never forget,” Zeta Phi Beta member Tracy Washington said.  “It’s so good to see that a brotherhood like this can stay strong for 100 years.  I commend every single man that traveled here today, coming from close or far.  They deserve it.”

The Sigmas are the first Black fraternity to open its own museum.

Prior to the ceremony, a Centennial Collegiate Summit was held for the brothers and their Greek sisters Zeta Phi Beta Sorority to discuss various topics that affect the youth.

“I was sitting in the collegiate summit mesmerized by Brother Rafeal Matos,” one Sigma said of the remarks from a California higher education administrator who is also the  fraternity’s historian, western region secretary and an active member of the Sigma Leadership Institute.  “He is transforming a vital and complex discussion into in an exciting and interactive dialogue.”

One member said the summit gave him a new insight on his own life.

“This summit taught me that I need to implement my rituals in every aspect of fraternity life, and promote the principles and services of my brotherhood,” John Phillips told the AFRO of his fraternity.

“It’s great to look at what our founders had in mind 100 years [ago] and then to look around today and see that we are stronger than ever,” another member, Tom Beal said.  “When is the last time you’ve seen a line for a museum?  Great way to start my week.”

Follow the PEPCO energized AFRO coverage of the Sigma Centennial and the Zeta 2014 Boule’ celebrations on afro.com  or on the special AFRO Live Updates mobile app at  live.afro.com