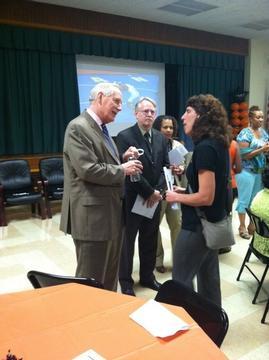 DuVal’s High School Marching Band, under the direction of Anthony Snapp, started off the program with a thunderous performance with the musicians, flag girls, cheerleaders, and dancers strutting around the cafeteria. Actress and gospel singer Kitra Williams performed.

After the performances, Prince George’s County Executive Rushern Baker III made his way to the podium to express how he felt on choosing Maxwell as CEO of PGCPS.

The school’s cafeteria was filled with Prince George’s County residents, faculty and staff, and business and community leaders. Besides the school board, there were some guest appearances in attendance. The Greenbelt Mayor Judith Davis and Bowie State University President Mickey L. Burnim attended.

The line of people waiting to meet Maxwell and talk briefly with him stretched around around the cafeteria. And in spite of the crowd volume, Maxwell met each person in a line that included old friends, former coworkers, and residents who want details about his plans for the state’s second largest school system with smile and a firm handshake.

To many in the crowd, Maxwell is not a stranger. He was superintendent in neighboring Anne Arundel County for seven years and was a community superintendent in the Montgomery County Public School system. And despite jobs in far-flung parts of the state, he has remained a resident of Prince George’s County.

Dr. Segun Eubanks, who was appointed the new Board of Education chairman by Baker on June 1, sees a lot of success in the future of Prince George’s County school system. Eubanks told the {AFRO} “Today we are on the path of excellence.”

As Maxwell, walked to the podium, members of the school board surrounded him on each side. Maxwell knows that they have a lot work do, but he also wants all the Prince George’s County residents to help out as well. Maxwell said he knows that this task cannot be done alone and that he needs all the help he can get.