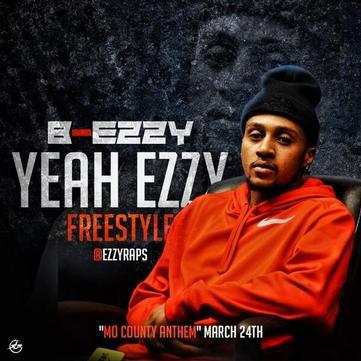 In an age of social media and online promotion, one Maryland rapper has found a new way forward for his career by taking a retro approach to marketing.

Brendon ‘B-Ezzy’ Perry, 24, said his strategy was sparked by a conversation he had one day with his managers about marketing for an upcoming song, “Mo County Anthem.” They struck upon the idea of advertising through the D.C. area Metro bus system to promote his single, an angle no other local rapper had recently taken.

“I pride myself on being a trendsetter and the ads on Metro definitely helped other people to see that as well,” Perry told the AFRO.

Perry said he has spent $8,000 to have his ads presented both inside and outside Metro buses, at bus stops, and inside various malls across Montgomery County, Md.

“I just saved up a lot and stopped buying clothes and shoes like I used to,” Perry said. “I still save now because I want to be able to work for myself. So if it’s not something I need, or for my daughter, nine times out of 10 I won’t buy it.”

Perry’s ads will run on Metro for the next year.

“CBS Outdoor, who owns the advertising for Metro, gave me a deal I couldn’t refuse,” Perry said.

Perry has been rapping since the fourth grade, but didn’t take his career seriously until his freshman year at Morgan State University in 2009. Along with some friends, Perry made a Morgan State classic, a song entitled “Morgan Girl,” which had more than 16,000 views on YouTube.

“Rapping is something I’ve honestly done my entire life, just basically because of the culture that I grew up in,” Perry said. “Nas inspired me as a kid though, and whenever I was doing my first passion, playing basketball, I always wanted to rap. Now this is my life.”

Perry listened to Nas’ song “2nd childhood” every day before school in sixth grade, and said it made him wish he could “paint pictures like that” with his vocals.

His second favorite rapper is Meek Mill, because Perry said he can “relate to that struggle that he raps about and being able to shine because you made it from that.”

“A lot of people say he screams too much, but to come from where we come from, it takes that kind of aggression to make it,” Perry said.

Perry has a huge support team, including his role model, his mother.

“She has taught me that nothing in life is handed to you,” Perry said. “You have to work for everything you get. I watched my mother work two and three jobs just to support us. My mother and my father split when we were little, so life becomes a little tougher with a break up. I get a lot of mental toughness from my dad though, he really taught a lot about the values of being a man and every time we talk, I learn something new from him. If I didn’t have both parents in my life, I’m not sure how good of a person I would have turned out to be.”

Perry said his mother always critiques his work and suggests new topics to talk about. Perry said his father provides advice on life and the business side of music.

“He always tells me to make music work for me and do not become a slave to the game,’ Perry said.

Perry dedicated the “Mo County Anthem” release date to his mother—it will be released on March 24, her birthday. Perry has four brothers and six sisters, although his mother only has two kids. Perry also has a two-year-old daughter.

Although Perry is chasing his dream, he currently works at a local post office and the grocery store on Andrews Air Force Base. In five years, Perry sees himself one of the top rappers in the world, touring and enjoying life.

“I’m way too deep in the game now for this to be the only platform for my music to reach,” Perry said. “My team and I are going to accomplish all of our goals.”