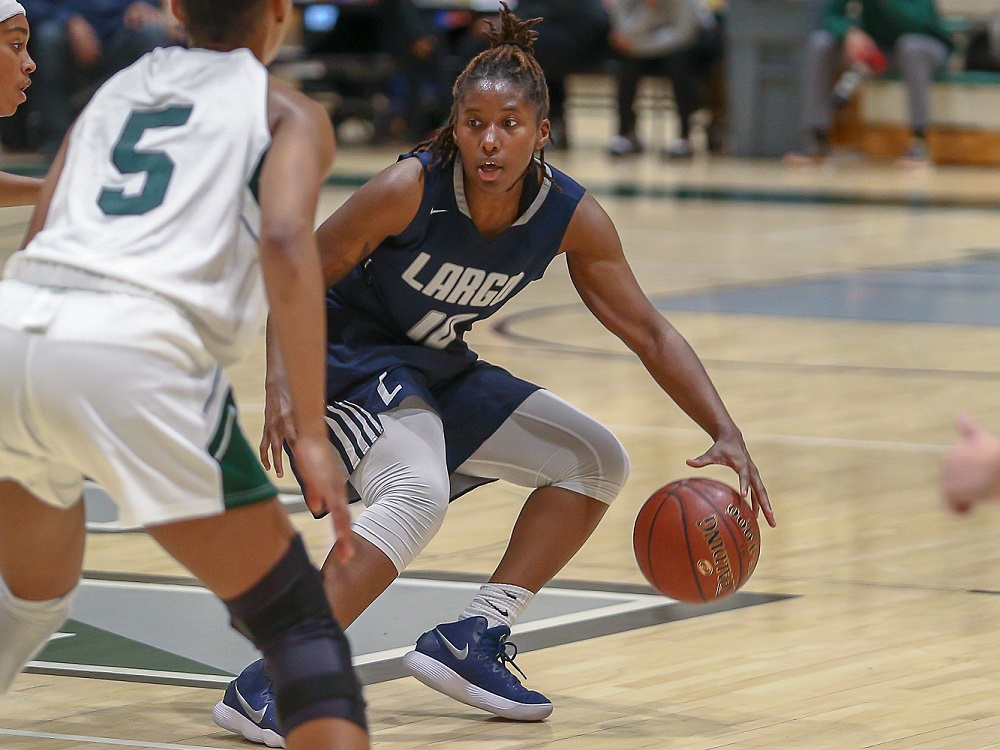 SPRINGDALE – The Largo Lady Lions dominated the Charles H. Flowers Lady Jaguars during a high school basketball match on Dec. 22, but Flowers made an incredible comeback late. It was sophomore Vanessa Schwarzmann who saved the day and gave Largo a 69-63 victory over the Jaguars.

With blocks, steals, hard-fought rebounds, turnovers, and fouls to start the game, both teams had defense on their minds in the first quarter.

Neither team gained an edge on the other as there were multiple lead changes throughout the opening quarter. However, it was Largo who had the last word as they finished the frame on a 10-0 run and took a 17-10 lead into the second quarter.

Largo senior forward Sasha Francis was the anchor in Largo’s defensive efforts in the first half with multiple blocks, steals and she was an imposing figure on the floor with lockdown defense.

“When I was playing down low, I had to make sure I didn’t get any fouls but also get them to try to stay out of the paint or send them to the sideline,” Francis said, who finished with 10 points. “A lot of members on our team had fouls, so I had to make sure that I didn’t have any to contribute to Flowers.”

In the second quarter, both teams battled back and forth. Every time Largo scored, Flowers came right back with an answer of its own. Largo took the biggest lead of the first half and increased its lead to 11 points, but Flowers fought back to narrow the margin to within six points.

Largo ended the quarter strong as it took a 31-22 lead into halftime. The Lady Lions tarted to pull away at the start of the third quarter with a 6-1 run and took a 14-point lead, which was the most massive deficit of the game up to that point.

Flowers then went on a 10-0 run led by its defense and brought the lead all the way down to four points. Largo then went on an 8-1 run and pushed the lead back to double-digits. Largo went into the final quarter with a 46-35 lead and the momentum on its side.

After Largo went up 60-44, Flowers went on a 17-4 run that brought the score within three with under a minute left to play. As Largo passed the ball around, they found an open Schwarzmann, who spotted up for three and hit nothing but net.

Schwarzmann’s first points of the game sealed the deal for Largo, and they could not have come at a better time.

“I had an off night and coaches were still telling me to shoot,”Schwarzmann said. “When I made that last three, I was surprised that I made it because if I didn’t, I wasn’t going to make a three that whole game.

“So, the coaches kept telling me to shoot your shot, be confident in your shot, step to the ball and do what you need to do to make the three because you need to help the team out.”

Tania White led the Lions in scoring finishing with a game-high of 36 points.

“On offense, I knew that I had to step up when Briana Jones fouled out,” White said. “Sasha (Francis) and I pulled everybody together and calmed them down and told them to play their game. It was just a regular basketball game, so they just had to pull their game together just like we do.”

Although Largo got the win, it was a game that they almost gave away in the last minutes. However, Largo Head Coach Ayana Ball-Ward knew that her team was going to come out with a hard-fought victory.

“This was only the second game we played all year so we had to work out our kinks and we knew that it was going to be a tough game,” Ward said. “In the second half, we got into a lot of foul trouble. One of our main players fouled out early, and Tania (White) and Sasha (Francis) did a great job of keeping the team composed and keeping them on the same page. Flowers made a great run in the fourth quarter, but I think just the composure and the experience of both Sasha and Tania, held it together for us.”

As for Flowers, although they did not get the job done, it was a good effort, and they never quit.

“In the first half, we didn’t play with intensity,” Flowers Head Coach Taylor Brown said. “We should have been up more on the defensive end, but I thought we did a good job in the first half.

In the second half, the difference was that we picked up on the intensity and played with more heart.

I think that was the game changer and we started trapping White and getting some steals and going to the basket.

That was the difference, we made the defensive adjustments and started playing with more heart and intensity.”