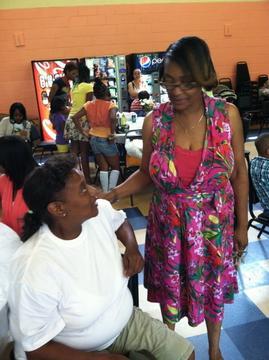 The United Communities Against Poverty (UCAP), a Maryland-based charity, joined with the Prince George’s County Young Democrats and other groups to host the second annual “Help 4 Shepherd’s Cove” on July 27, a day of performances, support, and donations for the Shepherd’s Cove Homeless Shelter for Women and Children in Capitol Heights, Md.

United Communities Against Poverty was established in 1964 and has become the leading advocate in Prince George’s County for communities of people facing deficiencies in education, affordable housing, economic stability, and adequate health care access. Their mission is to alleviate poverty, improve awareness of the needs of low and moderate-income residents, and to maximize the life of Prince George’s County residents and impoverished individuals.

“I always had the passion to work with homeless individuals in need,” UCAP President and CEO Gwendolyn Ferguson told the AFRO.

Shepherd’s Cove opened five years ago with 100 beds to serve those in need year-round. The shelter’s ultimate goal is to improve the lives of those impacted by poverty, homelessness, hunger, unemployment, lack of education, and the numerous additional special problems that keep people from living a healthy, prosperous lifestyle.

Maryland State Delegate Melony G. Griffith (D-District 25) was in attendance, and told the AFRO that “preparing the community for the beautiful young people is really, really important.”

As women and children filled the room, their facial expressions showed excitement, anticipation and gratefulness. Urban music filled the room through speakers as children and women around the room danced. Despite their circumstances, those in attendance were smiling and appeared to be having fun.

A local dance crew entitled “Syce Game” moved the crowd with their hip-hop dance moves, a performance which had the audience standing up applauding, with their phones out recording the show.

The program ended with the contribution of donations provided by the various organizations, communities and volunteers, including hygiene products, bedding materials, cleaning supplies, book bags and school supplies for the children, and purses for the women.