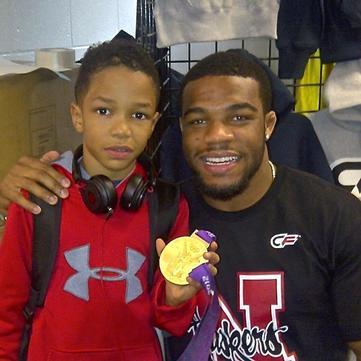 Nasir Wilkinson from Bowie, Md. is the number one ranked wrestler in Prince George’s County and in the state of Maryland for his age group. Wilkinson is only 11 years old.

It all started when he was 5 years old and wanted to participate in a sport. But he wasn’t old enough for team sports. So he chose wrestling –and has never looked back.

At his first wrestling try-out he was encouraged to keep at it by wrestling coach Charles Cherry, who said Nasir “has what it takes.”

Six years later, Wilkinson has a collection of over more than 50 trophies and medals, about 90 percent of them first- place trophies. He is big enough and old enough to play football now and he is on a pee-wee team but his main focus is wrestling.

While other kids idolize baseball, football and basketball superstars, Nasir looks up to Jordan Burroughs, an Olympic gold medal winner. Burroughs won a gold medal for wrestling at the 2012 Olympic Games in London.

Nasir is so into wrestling that he attended a wrestling rally in Georgia in August where he was able to add his voice to the chorus of criticism and protest calling for the restoration of wrestling to the Olympic Games.

Such rallies were common throughout the athletic world in the wake of the Feb. 12 IOC decision to drop wrestling, along with several other competitions from its list of core sports for the 2016 Olympics Games.

Therefore, Wilkinson was overjoyed when the February decision was overturned late this summer.

His mother Deidra Wilkinson, a management analyst at the Department of Energy, told the AFRO: “What I love about wrestling is that it is the only sport where if you lose, it’s your own fault. Wrestling has taught Nasir that he is the master of his own destiny. If he wants it, he has to go out there and get it.”

Although Wilkinson loves wrestling, he is just like any other 11 year old. He loves playing video games, watching television and hanging out with friends. He is also a very “picky eater” and loves chicken wings.

Wilkinson’s main focus besides wrestling is school. Wilkinson attended Crofton Elementary in Anne Arundel County. Wilkinson is now currently in sixth grade and being homeschooled. He would like to attend McDonough Prep High School in Owings Mills.

Ricardo Wilkinson, Nasir’s father, plays a key role in Nasir’s success so far. Each week Wilkinson, an information technolgy technician at the federal Food and Drug Administration, reviews with Nasir what the boy has covered during his three practice sessions that week.

Nasir’s father told the AFRO: “I love the physical and mental discipline it teaches him outside of what I do as a father. It’s a very tough sport although I’m sure he can really be successful at it. He hasn’t even reached a confident phase yet within himself and he’s done just fine thus far. When he really gets it, I see nothing but success for him.”